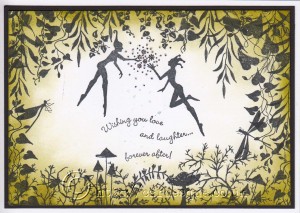 It may not look like your average wedding card but this card is for my niece who has just got married to a lovely guy and I know this is more her style.  They look more like elves than fairies as they don’t have wings but I would say they are soul mates. 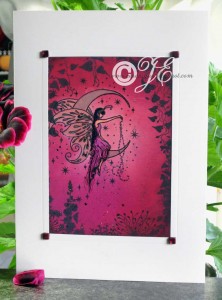 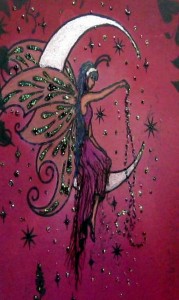 Erin has a fairy sitting on a crescent moon tattoo and although it is not exactly the same as this stamp I thought it would make a nice card for her.  From the front the moon just looks a bit grey but just turning the card ever so slightly at an angle shows the lovely pearly moon and some of the glitter or should I say fairy dust. I brayered both red and purple at the top of the card but mostly purple as I got to the bottom left corner and I added some feathery lines to her dress to give her a more floaty feel.
Inks:  Adirondack Cranberry and Wild plum, Stampin up Ruby red, Memento Tuxedo black
Card: silk matte coated card, large aperture card
Stamps:  Lavinia silhouette leaves and flowers, fairy and moon stamp (unknown)
Other:  stickles, black glitter, black pen, copics, Pearlex Macropearl, mini mosaics I love doing these brayered cards and this is a nice one for a female of any age group.  The project is from The craft stamper mag, April 2009 and at the last crop a few of the other ladies and I had a bit of a brayer workshop.  I added the punched leaves later. 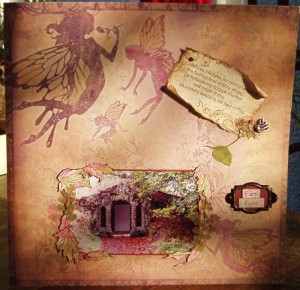 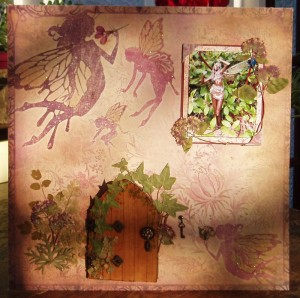 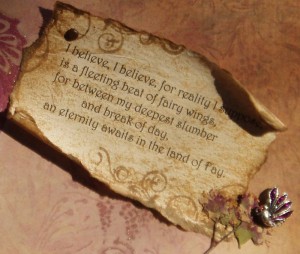 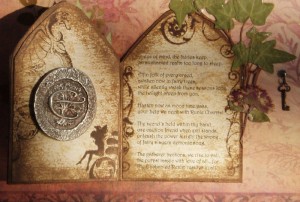 Here is my double layout which I finally managed to take photos of – my camera has gone kaput and I had to borrow my husband’s which is a newer model and works slightly differently.
The first photo was taken in a beautiful forest at Gosford Estate. and The second photo is of Maranna, my lost wax bronze sculpture. She now lives in the conservatory after a frisky fox knocked her over and she suffered a broken shoulder and wrist (all better now though).The verses are taken from the certificate that authenticates the sculpture and the magic fairy coin has her limited edition number on the back so is kept hidden behind the fairy door.