I was reading a science magazine one day and found a fabulous photograph of a Tompot Blenny fish which looked so colourful and full of character that I wanted to have a go at painting it.  With kind permission of Alexander Mustard (the photographer) I had a go.  I did a rather scruffy, coloured pencil painting/sketch in my sketchbook.   I did not do the photograph justice, so one day I will do a better painting but perhaps with water colour, acrylics or mixed media. It needs some really bright colours.   As usual, some of the blended colours did not show up on the photograph below, especially the turquoise in the background.  It was fun to do but I am not happy with the result, it is too scratchy looking and not bright enough.  Must do better. 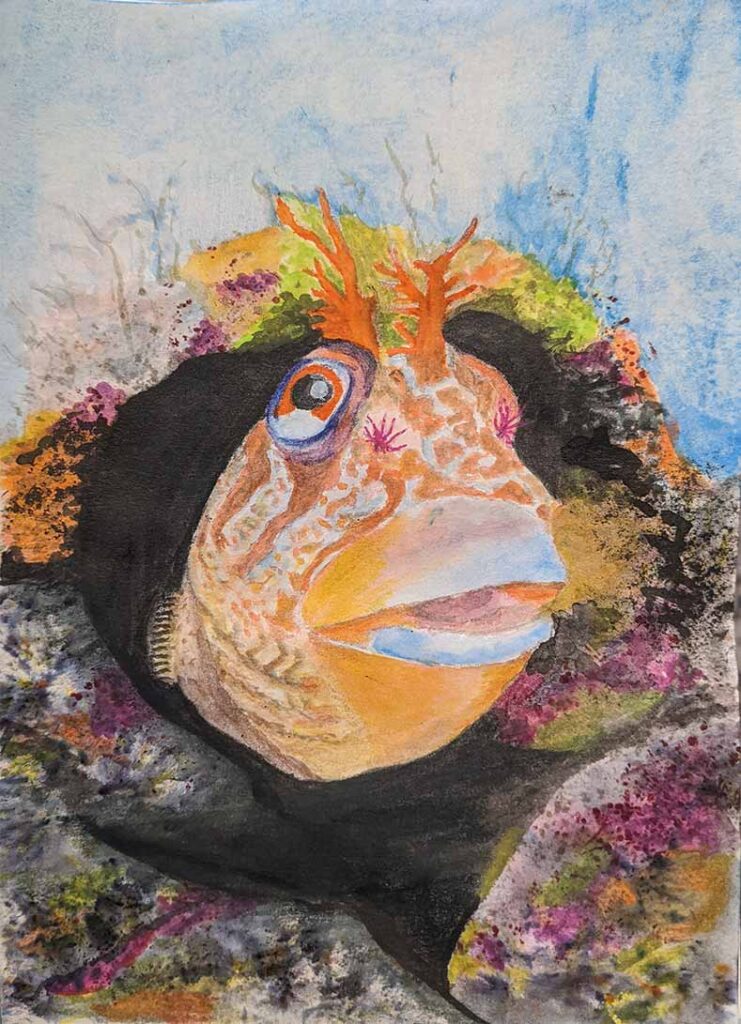 Duddingston Kirk are holding an event in early January 2020 called – a time of hope and new beginnings – contemplating , poetry, prose, paintings, photographs as well as  performances of music, song and story telling.  I decided to google symbols of hope and came up with the idea of an anchor, which used to be an early Christian symbol, and a butterfly, a symbol of hope.  Using Prisma pencils I made a sketch, and I also used a few stamps.  I didn’t like the background as it was a bit scratchy looking despite me trying to smooth it using Sansador.  Anyhow I took a photo of it, cropped it, then mucked around with the image in photoshop to give it a bit of a border/vignette. This is my first version, it looks like a tattoo and I am just not sure….I may change it before I send it in to exhibit. 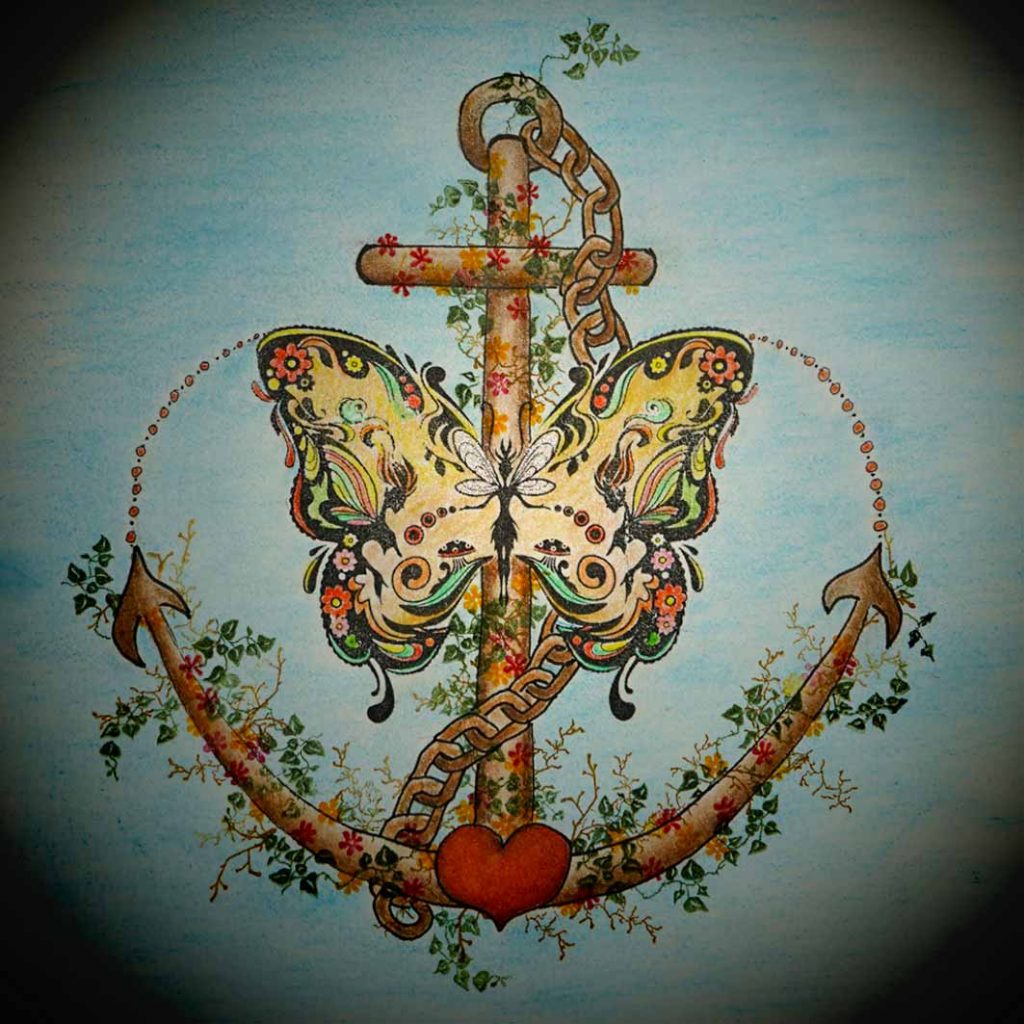 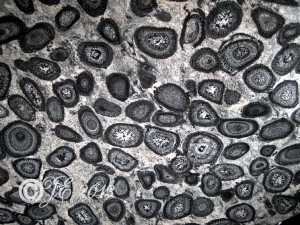 Finally on the last day of the sketchbook challenge for March I have had time to do a sketch.  The theme for March was Natural surfaces – I absolutely love the patterns you see all around in nature and I have quite a few photos of surface that I have yet to do something with.  A while back I took a couple of photos while we were visiting the Natural museum of Scotland above is orbicular granodiorite.  You can capture quite a lot of detail even with my small camera and I can see I will have fun doing a few things with these images when I have time. 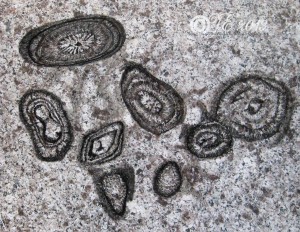 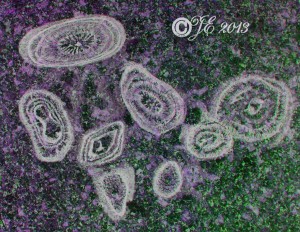 I did a small sketch using shades of grey Pitt pens on some patterned paper which already looked like a stone background.  This was then manipulated in photoshop (inverted and coloured) to add colour.  I was just mucking about so I don’t know if I would ever be able to replicate it. 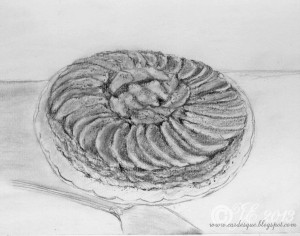 To encourage me to try sketching a bit more for practice I have joined the sketchbook challenge and this months challenge theme is ‘Sweet: sugar and spice and all things nice’.  I didn’t know what to sketch so I flicked through some cook books and found a photograph of a delicious looking caramelised apple flan (or tarte tatin) so I thought I would have a go.  I scanned my sketch with a sheet of acetate over it in black and white mode so it is not picking up the subtle colour of the pencil.  I am looking forward to doing a few more of these challenges. 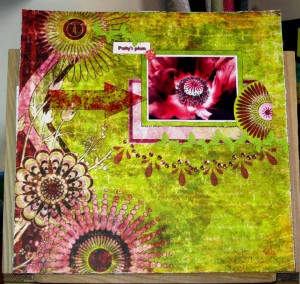 For this challenge you had to make anything you like but you had to use this sketch below. You get bonus points if you made a layout.
I have used BoBunny paper, Circle Circle Dot Dot template, gems, acetate arrow and some butterfly trim. My photograph is of my Oriental poppies in the back garden from last year (I was trying out the macro setting on my camera).
I have squished the sketch so it is all at the top right hand side of my layout. 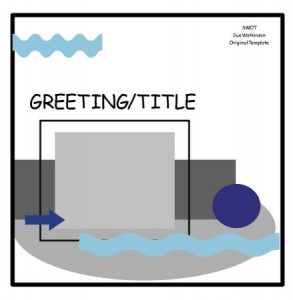 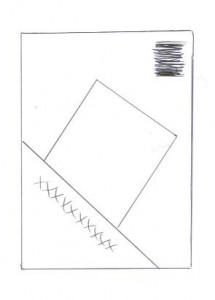 I am the host for the may ATC swap at CBC and this month instead of a topic we will be using the sketch as a template. You can rotate, skew, flip, reduce size or interpret it as you wish as long as the template can be seen in some shape or form. 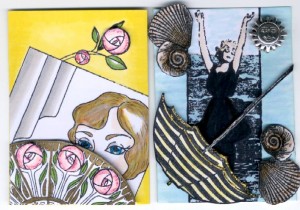