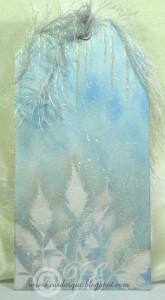 This tag (for week 36 in the ukstampers challenge) is so much nicer in real life as you can really see the twinkle.  This weeks challenge had to include:

I used the leaves as a stencil and dabbed the blue chalk inks over them then dabber a little Platinum planet over the tops.  You can just make out some veining on the leaves as these were the same ones I used for the previous tag so there was a little residual ink left on them.  The snow was stamped using the white ink and the icicles using the Platinum planet ink. I spattered some white paint over the whole tag to give an extra snowy effect.  My doodling is actually the 3 spiders webs in the foliage – using the white pen and highlighted with the glitter pen.  The icicles were highlighted using the glitter pen too and also diamond glaze.  I took the glitter pen all around the edges too. 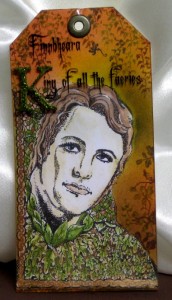 My tag for the ukstampers challenge No.36 – ‘K’ for king features Finnbheara, who is King of all the faeries. The wording is on acetate which gives the slight shadow effect to the text. Some of my first ever stamps were bought from Scottish border Stamping and they very kindly sent me Finnbheara as a free gift. I haven’t had any ideas on how to use him until now so this is his first outing.